How Much Damage Does An Earthquake Do?

Anonymous answered
That depends on where the epicenter is.
Iowa would expect to have less fatalities compared to NYC, NY. 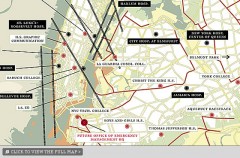 Anonymous answered
Sometimes a lot sometimes very little and sometimes no damage happens during an earthquake, it depends on how deep it is in the earth.