What Is A Chloroplast?

Kath Senior answered
A chloroplast is an organelle found only in plant cells. Chloroplasts are the site of photosynthesis in the plant cell. They contain the green pigment that causes plants and leaves to look green. 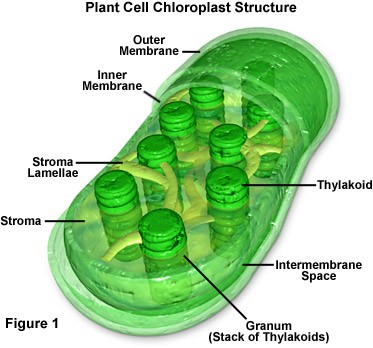 Each chloroplast is tiny, only a few micrometers wide. A typical plant cell contains about 30 chloroplasts, but some cells, such as those at the surface of a leaf, can have more.

The chloroplast has a complex internal structure. It has its own lipid bilayer membrane and contains stacks of internal membranes called grana (singular granum). These stacks contain individual units called thylakoids. The membranes within the thylakoids contain the molecules that capture light energy from sunlight for use in photosynthesis.

The energy is absorbed and passed on through a series of chemical reactions and is used to power reactions in the stroma (the space between the grana) that build sugars from carbon dioxide and water. This overall reaction, is photosynthesis and it is the source of all the food energy that exists on Earth.

Viviana answered
Chloroplast is when light energy is converted to chemical energy in the form of sugar= glucose. Chloroplast is found in plant cells.

Marc Miller answered
Chloroplasts are the organelles which take in sunlight and transform carbon dioxide + water and turn it into glucose + oxygen. If you look at plant cells under a microscope, you'll notice all of the chloroplasts hanging out towards the side of the plant that got the most sunlight.

face book answered
A green pigment in leave/plant that helps to trap light in order to make food.

Deepak Sharma answered
Chloroplast are organelles located in the mesophyll and guard cells. These chloroplasts contain green pigment called the chlorophyll which absorbs the light energy for photosynthesis.

Anonymous answered
The Chloroplast is the food producer of the plant.The pant creates starches and sugars by the process of photosynthesis.

Anonymous answered
It is the site where plants make food, combining together with carbon dioxide and water, using the energy from sunlight, to make sugar.

Haider Imtiaz answered
In photosynthetic plant cells, there are membrane bound structure containing a green pigment, called chloroplasts the green pigment is an organic compound, chlorophyll, which helps the cell to observe light energy and utilize it to manufacture food. Chlorophyll molecule resembles the haem group of hum global, a protein used in the transport of oxygen. The main difference between these two molecules is that chlorophyll has Mg++ while haem has Fe++ as the central atom.

Chloroplasts vary in there shape and size with a diameter of about 4-6 um. Under light, microscope they appear to be heterogeneous structures with small granules known as Grana embedded in the matrix. Under electron microscope, a chloroplasts shows there main components, the envelope, the Stroma and the hyracoid, the envelope is form by a double membrane, while Stroma covers most of the volume of the chloroplasts. Stroma is a fluid which surrounds the hyaloids. It contains proteins, some ribosomes and a small circular DNA. It is in this part of the chloroplasts where CO2 is fixed to manufacture sugars.

On the layers of hyaloids chlorophyll molecules are arranged that is why Granum appears to be green. Each Granum is enter-connected with others by the known-green part called interregnum. Membranes of the Grana are sites where sun light energy is tracked and where ATP is formed. Chloroplasts are self-replicating organelles.

ifeanyi idegwu answered
It is important to their photosynthesis

Anonymous answered
Chloroplast are the sites of photosynthesis. More chloroplasts are found in the palisade mesophyll than in the spongy mesophyll.

Anonymous answered
Organelles in which the energy from sunlight is used to make sugars.

Anonymous answered
It is used in the process of photosynthesis