What Does The Pancreas Look Like And Where Is It Located In The Human Body?

Roger Clegg answered
The pancreas measures six to 10-inches (18 to 25 cm) long and is an organ which is located behind the stomach in the back of the abdomen. Its form is of a spongy consistency and shaped similar to a fish, extended horizontally across the abdomen.
The tip of the pancreas is located on the right side of the abdomen and is connected to the duodenum which is the first section of the small intestine directly through a small tube called the pancreatic duct.
The narrow end of the pancreas, usually called the tail, extends to the left side of the body. The pancreas has a number of functions including making pancreatic juices and hormones, including insulin. The pancreatic juices are described as enzymes that assist the digestion of food in the small intestine. Insulin is described as controlling the level of sugar in the blood.
The digestive system breaks up and digests the food we eat. And after two hours or more in the stomach, the digested food is moved in bits and passes into the beginning of the duodenum. When the food eventually reaches the duodenum, the pancreas releases its digestive juices which goes down the pancreatic duct and mixes together with the food. The juices consist of enzymes that help to break down the food into very small pieces which are then absorbed into the body through the small bowel.
If you do not make enough insulin in the body, you will have diabetes which means you will have to take injections of insulin in order to regulate the blood sugar level. This also means the pancreas secretes less insulin thus the requirement for replacement injections.
Normally you have insulin as a small injection under the skin. Before you take an insulin injection, you will need to check your blood sugar level so that you know how much to inject. This process is done by making a small prick on your finger and squeezing a drop of blood onto a testing strip. 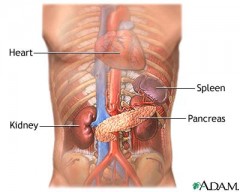 See the diagram for the answers to your questions.

Anonymous answered
On my left side

Anonymous answered
It looks like chitterlings and is in your lower stomach area.

Anonymous answered
The pancreas is a retroperitoneal structure.

Kyoko Katayama answered
The pancreas is located in the abdomen.

Anonymous answered
It is in the rt and left upper quadrant