Where Has The Wildest Weather On Earth Been Recorded?

Susan Hayes answered
Any day of the week you can find people talking about the weather. Temperature, humidity, rain or sun, it’s one of our favourite topics of conversation. Sometimes though, the weather does a little more than make plants grow and give us something to talk about with our fellows.  Sometimes it does something very unexpected. 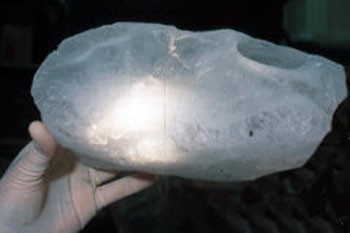 This is one ice cube that won't fit in your cocktail glassAn aerial assault began to fall on the land of Spain in January 2000 and continued for more than two weeks. The attackers?  Basketball sized chunks of ice weighing up to 6 lbs that rained down out of a clear blue sky, wreaking havoc over the southern Spanish countryside.

Theories abounded as to what had caused these icy bombs, from airplane lavatory based projectiles to aliens, and though some theories have been disproved, no one is sure what causes these massive chunks of ice to form and no one has a clue how they seem to appear without cloud cover or any other weather pattern normally associated with rain or hail. Your average hailstone can be lifted by a powerful updraft, keeping it aloft long enough to form into an ice pellet that eventually grows too heavy for the wind to to keep aloft and finally falls to the ground, a victim of the laws of gravity.  Though these megacryometeors share the basic appearance and chemical make up of an ordinary hailstone, their massive size defies scientific explanations for how something bigger than a bowling ball is staying airborne. How much bigger than an average hailstone are they?
Brazil had a single megacryometeor fall out of a bright, sunny sky that tipped the scales at 440 lbs. 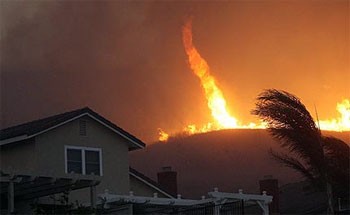 This nasty tornado is not taking any one to the land of OzWhat’s worse than a tornado?  How about a tornado made up of fire? Fire Whirls are a rare occurrence, forming when climatic conditions are perfectly balanced to cause a burning fire to create a nightmare inducing vortex.  These spinning whirls of fiery doom range in size from less than 3 meters to more than 1000 meters across, and can last only a few moments or twenty, depending on their power and the conditions that power them.

Though they are seen around wildfires and other large conflagrations, the worst Fire Whirl recorded was part of the aftermath of the Great Kantō earthquake in Japan in 1923. Tokyo was decimated by a firestorm, and at the heart of that storm was a fire whirl that killed 38,000 people in fifteen terrible minutes. 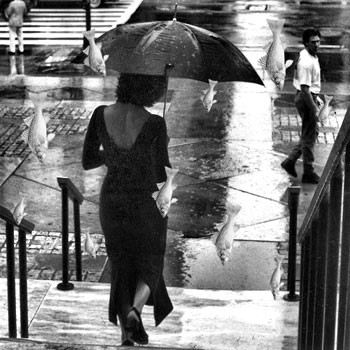 One fish, two fish, red fish..splattered fishIn February 2010, much of Australia was experiencing heavy rains, but in Lajamanu the rain was a little different; instead of water, fish were falling out of the sky. Eye witnesses reported that hundreds of fish tumbled out of the sky, dotting the landscape with floundering fish wondering where their water went. The fish were identified as Spangled Perch, common to many fresh water lakes in Australia.  The thing is, Lajamanu is no where near a lake or any other body of water. The inland town sits on the outskirts of the Tanami Desert, hundreds of kilometres from any lake.

This is not the first time the Australian town has been hit by perch precipitation either.  In both 2004 and 1974 there are records of fish coming down from the heavens. Though weather conditions were ripe for a tornado at the time of the fishy free fall, meteorologists state that there were no reports of any tornado or waterspouts that could explain the phenomenon. 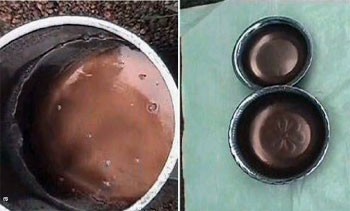 But where's the Purple Rain?
We all know that rain will sometimes lead to rainbows; multihued light shows that arc through the sky.  But sometimes rain itself can be rainbow hued, causing no end of consternation and a great deal of mess, as well as mutterings about rains of blood and the end of the world.

In July of 2001 it rained in Kerala, a common occurrence for this time of year. What was different though, was this rain was red, and in some cases yellow, black and even green. Over the next few weeks outbreaks of technicolour precipitation came in from all around the region, leaving behind pink and yellow stains and a lot of questions.

First thought to be tainted by the dust of a meteor that had exploded far above Earth’s atmosphere, it was later realized that the rains contents were entirely terrestrial, and the items first thought to be star dust resembled spores. Eventually it was determined that the rain had been coloured by algae spores that had bloomed and become airborne, where they had contaminated the rainfall. 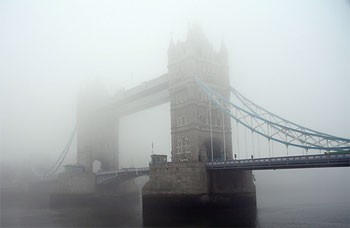 Pea soup Fog - the other silent killerDuring the Industrial Revolution the country of England found itself with a unique weather condition that has made its way into history. Pea Soup Fogs; so named for their disturbing pea yellow colour and thick consistency were common in this era, especially in the city of London.

At the time the fogs were considered to be an inconvenience, limiting visibility and allowing the criminal element to grow more brazen as their acts and subsequent escapes were hidden by the thick mists that could last for days. The legend of Jack the Ripper grew during the times these fogs were common, and they are an iconic element of many descriptions and films depicting London.  What no one realized for many years was that the greatest danger was not in what the fog was hiding, but what is was composed of.  The coal dust and pollutants that caused the fogs to form were carried about the city in a breathable chemical cocktail that hung, suspended for days,  poisoning every man, woman and child who wandered through it.

Respiratory ailments claimed large numbers of the population, and in 1952 the weather in London conspired to brew up a deadly fog that lasted for four days before dispersing.  Cold air, a lack of wind and the presence of an anticyclone all combined, collecting the airborne pollutants from coal fires and other chemicals into what is called the Great Smog. By the time it was gone, over 12,000 people had been killed by its toxic touch and 100,000 were ill. 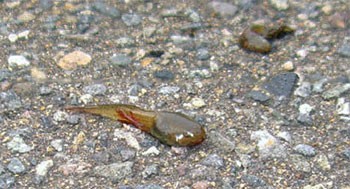 Imagine this pelting down on your umbrella...Fish are not the only thing falling out of the clear blue sky these days. In Ishikawa Japan, reports of tadpoles falling out of the sky started coming in in June of 2009. One man came out to his car to discover that more than 100 dead tadpoles had appeared, splattering themselves over the windshield of his and other cars in a parking lot. Showers of polliwogs were reported all over the Prefecture over a 48 hour period, baffling residents and scientists alike.

Two theories have been brought forward, the most accepted one being that the rain of tadpoles was being caused by waterspouts and tornados, sucking the unfortunate creatures far up into the air and then leaving them to the perils of gravity. No such weather patterns have been reported however, making many question this line of thinking.  Another theory is that birds have been scooping up mouthfuls of tadpoles, only to spit them out later, while they are in flight. A researcher at the Yamashina Institute for Ornithology dismissed this theory, stating "Crows eat tadpoles but if these were spat out (by the birds), a wider area should have been covered."  Bad enough to have your car covered in polliwog parts, I hope for the sake of the residents that the tadpoles weren’t spat up by a bird before hitting the ground. That’s just adding insult to injury. 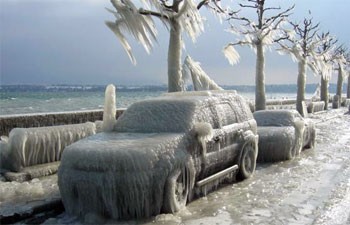 And you thought black ice was bad...Ice Storms are a strange phenomenon that occurs when warm air layers itself over cold air, and the ground is at freezing temperatures or close to it. When the raindrops hit the surface they are super cooled and freeze almost instantly, creating a beautiful and terribly destructive shell of ice around everything it touches.

In 1998 the weather was perfectly set up for ice storms, and Mother Nature complied, pounding a small area of the United States and Canada with a series of storms that resulted in over 5 billion dollars in damages, 25 dead and the near destruction of the area’s entire electrical grid.

The ice accumulations were so think that a single twig could be coated in as much as two inches of ice, painting the area in a glittering diamond coat that sparked like a Hollywood starlet on her first trip up the red carpet.  It also meant that the weight of all this ice was enough to collapse electrical pylons, snap power lines, trees and buildings. When the ice finally melted, it set off a series of floods that cost millions more in damages to those living downriver from the melt off.